Futakuchi Mana is a VTuber that is new to the scene and is making waves with her music using brutal metal covers and original songs on YouTube. For those who are already into the VTuber world or those looking to get into it, Futakuchi Mana may be the youkai for you.

With her debut stream that premiered earlier this year on February 13, there is a lot of information to take in and a lot of reason to become a fan.

Futakuchi Mana (二口魔菜 two-mouthed demonic vegetable), is a VTuber who labels herself as a virtual singer who “enjoys sing(scream)ing”.

While it is nigh impossible to confirm if this is a first, Futakuchi Mana is definitely our first metal-centric VTuber. Seemingly breaking the fun and cute mold, Futakuchi Mana is looking to fill in the heavy-metal-shaped hole in the VTuber marketplace.

Every bit of Futakuchi Mana is dripping with passion and personality. Her name references a popular youkai in Japanese mythology. The demonic veggie part of her name also points out her vegan nature and inability to process food that is not plant-based. She even lives in the “Ninth Circle of Hell” and can communicate in English, Japanese, and Demon.

Even though she presents herself to us as a VTuber, she is primarily a “Youkai Head Torcherer”—simply moonlighting as a VTuber.

Based on the current discography, we can see a clear trend of metalized songs. Although, there are several cases when Mana sings clean or more in line with the original version, such as the piano version of unravel by TK from Ling Tosite Sigure, and The Only Exception by the American rock band, Paramore.

Going forward, not only will she continue with cover work, but also original productions as this will encourage her to learn more vocal techniques.

For those interested in games, she has not fully confirmed if that content will come. But, as we’re here mainly for the music, we highly recommend giving her Ado cover of Usseewa a go!

We also have to include the cover of Inkya Impulse, which was already an extreme metal song featuring screams by Ikepy (ex-Her Name in Blood). Credits to the amazing editing found in the video for this one. Funnily enough, it was used as the ending theme song for a comedy anime, Asobi Asobase.

As for those interested in what’s on the horizon for Mana, there is a preview out now for Not Photogenic, a cover of Utsu-P who is a metal Vocaloid producer.

Now, if you’re finally convinced that Futakuchi Mana’s music hits home with you, you should know that her music is readily available for anyone to download via Bandcamp. Even those whose wallets are a bit hollow this month can get her music because it’s all “pay what you want”.

Alternatively, get the cover album “Covers, Vol. 1” on iTunes and Amazon, or stream via Spotify and Apple Music.

The VTuber known as Futakuchi Mana is the product of a team effort. Her model is made by LittleThingsPH who writes a webtoon under the title of Sir Rejection. The Mana team also includes a producer, Tachibana. Tachibana is a producer who has his hands on a number of interesting projects and got Mana to try VTubing. Thank you Tachibana-san.

Finally, there is Mana herself. However, this is not where the team ends.

Mana is very anti-simp. For those unaware, a simp is a derogatory term for fans of internet personalities. Simps throw money at their idols and expect a level of recognition. As such, she does not allow simps. Mana’s fans are “imps”.

Mana’s imps also have an imp community of their own, the “International Metal Project”, I.M.P. Musically inclined fans on her discord can collaborate on producing original music around the world. You can experience the fruits of their labor on her channel.

Lastly, let’s take a look at all the intricate details of Futakuchi Mana’s character design.

At first glance, she appears to be in somewhat typical goth lolita style. On further inspection, you can see that she is a combination of Japanese tradition and modern hardcore tied together with a classic black and red color scheme.

Some of her design notes that show how Mana is absolutely dripping with personality include:

We’ll walk you through each of the detail.

The clothing she wears is called hakama, a type of cut-off pants wear, and a common part of a samurai’s outfit. Even the pleats have significance relating to themes of courage and honor.

Over the top of everything is her gothic lolita-style lace dress tied together with her traditional style belt, the obijime. Her obijime is tied in a way reserved for the dead. So, next time some cutey at the festival tries to lure you behind the stalls, pay attention to her belt.

Her eyes and eyebrows are even points of note. Her eyebrow shape takes inspiration from the historic practice of hikimayu and her pupils feature an inverted pentagram and a non-inverted pentagram. 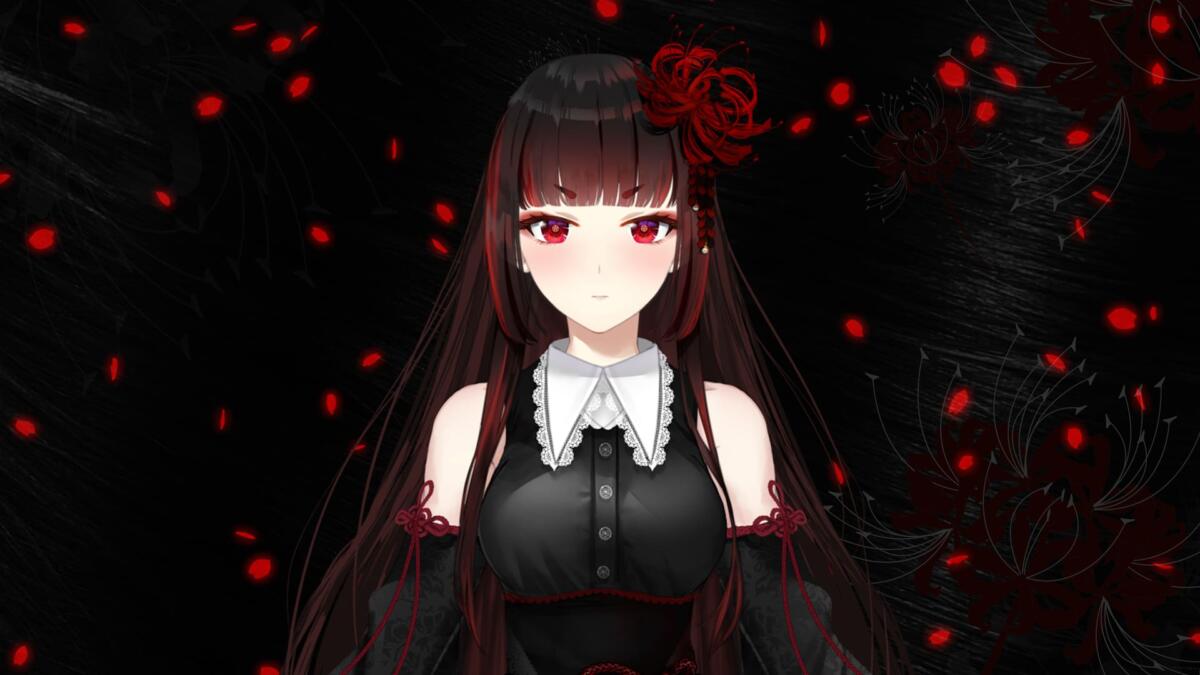 The final prominent piece of her design is the red flower in her hair. This flower is known as a higanbana. The higanbana should be familiar to fans of the popular anime Demon Slayer (Kimetsu no Yaiba). In Japanese culture, it has several uses and meanings. Usually, it signals the arrival of autumn. On the darker side, they are sometimes planted on graves as a tribute to the dead. Even seeing one can foretell a final goodbye.

While Futakuchi Mana may not exactly be the Jrock visual kei VTuber some have been longing for, we can definitely see her becoming somewhat of a pillar of the anime-meets-metal community. Here’s to hoping for more covers and originals in Japanese to fuel our love of all things moe and metal.