Ah, August. In a word, the Oxford English Dictionary defines “august” as “impressive”: as has historically been the month of August for . Recall what we penned : “…with August on the horizon, that month has finished higher for Gold in eight of the past 11 years…”

Moreover, ’twas during August just a year ago when Gold impressively printed its All-Time High at 2089. August indeed, that August. But from the “That Was Then, This Is Now Dept.”, what about this August? Shall it be another august August for Gold? Or rather a month of directionless disorganization, similar to the bedlam from one Dr. August Balls of Nice, (aka “The Great Balls”, so dubbed by Inspecteur Jacques Clouseau)?

To be sure, Gold was at best disorganized throughout July, price settling yesterday (Friday) at 1817. Having opened July at 1771 and not reaching below 1766, price could not clear 1835, the month’s wee 3.9% trading range being Gold’s narrowest since that recorded over two years ago in May 2019.

Our take is that Gold shall record another august August. Not necessarily up to its All-Time High (2089), let alone our forecast high for this year (2401). But nonetheless, an up month in the offing. And if for no other technical reason than price’s refusing to succumb to the ongoing parabolic Short trend as denoted by the rightmost red dots in this chart of Gold’s weekly bars from one year ago-to-date: 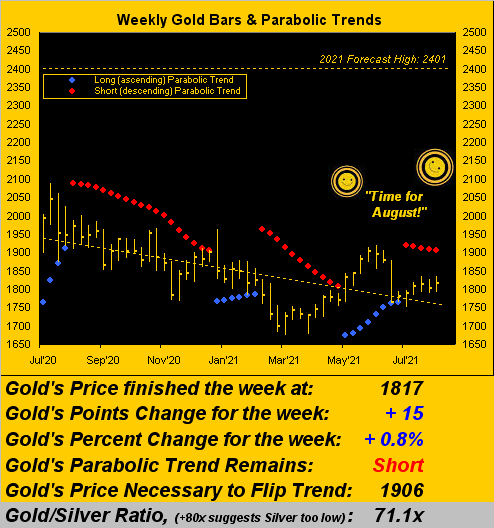 “So mmb, are you already eliminating August for Gold reaching your 2401 level?”

Not absolutely ruling it out, Squire; rather, being seasonally realistic. Our sense is that Gold’s best shot to accelerate upward shall occur during the September-October period when—for everything else—“it all goes wrong”. Such timely market turmoil you and I see as justified both fundamentally and quantitatively, but to which the balance of the investing world seem out to lunch, (which is always how it is before IT suddenly happens).

Still to this day when we query money folk about how they’re prepared to protect their or their client’s portfolios upon waking up with the “locked limit-down”, it remains that the subject swiftly is changed and/or we hear crickets. And as we’ve already cited: upon the price/earnings ratio of the reverting to its mean (19.2x)—which it has always done throughout the Index’s 64-year history—the loss this time ’round regressed into “Dow” terms may exceed -20,000 points in as little as three “trading-suspended” days. (As a recent reminder exercise, calculate the “Dow” high from 19 February to its 18 March low of just a year ago).

And now Dr. Anthony Fauci declares our COVID vaccinations shan’t necessarily shield us from DELTA? What’s next? OMEGA? Got Gold?

Still to date in 2021, hardly is Gold on any run. For as we turn to our BEGOS Markets Standings, the yellow metal is but one notch above the bumbling Bond:

‘Course, we cannot completely discredit the Bond: for as the “red-hot” economy was instead cooling through most of Q2, the price of the Bond today is 7.6% above its 18 March low, the yield since then having fallen from 2.505% to now 1.897%. Clearly that is indicative of Bond traders (who live in reality) following the Economic Barometer, whilst equity traders (who live in lemming land) chase earningless risk. Here’s the Baro, its rightmost pale violet stint essentially representative of the metrics reported for Q2.

Thus when you just saw the “Advanced Gross Domestic Product” annualized pace for Q2 come in nearly flat (6.5%) compared with that of Q1 (6.3%)—whilst all around were projecting a pace some 30% higher (8.5%)—hardly were you surprised when CNBS reported: “U.S. GDP Rose 6.5% Last Quarter, Well below Expectations”. (But that’s why you follow our stuff).

Still, with July’s and the Conference Board’s read on both improving, June’s was flat with hardly higher, slowing, and shrinking. “Red-hot”? Not. As so anticipated the Federal Open Market Committee, their only “talking taper” as usual in again voting unanimously last Wednesday to do nothing. They know they’re both stuck as well as a catalyst for “it all going wrong” the instant they jerk the rug a tad.

Meanwhile, we’ve a positive read on Q2 Earnings Season: with 277 of the S&P 500’s constituents having reported, 88% having beaten their bottom lines of a year ago, far and away the best year-over-year performance we’ve ever recorded. (‘Course going from “shut” to “open” makes for such substantive improvement). In fact, so “august” are earnings improvements that (thus far) they’ve knocked our “live” p/e for the S&P down from 56.3x a week ago to 49.8x today. Why, a return to the 19.2x median warrants an S&P correction of now just -61%. Are you prepared? (…crick-crick …crick-crick.. .crick-crick…)

As to the yellow metal’s aforementioned state of disorganization, so ’tis further emphasized here per our graphic of Gold & Co’s percentage tracks from one year ago-to-date, all of which are under water save for (barely) Franco-Nevada (NYSE:) +2%, followed by Newmont (NYSE:) -4%, Gold itself -7%, the Global X Silver Miners exchange-traded fund (NYSE:) -11%, Agnico Eagle Mines (NYSE:) -14%, the VanEck Vectors Gold Miners exchange-traded fund (NYSE:) -16%, and from worst-to-first-and-back-to-worst Pan American Silver (NASDAQ:) -21%. But upon their all going well when “it all goes wrong”, don’t forget the leverage, luv: 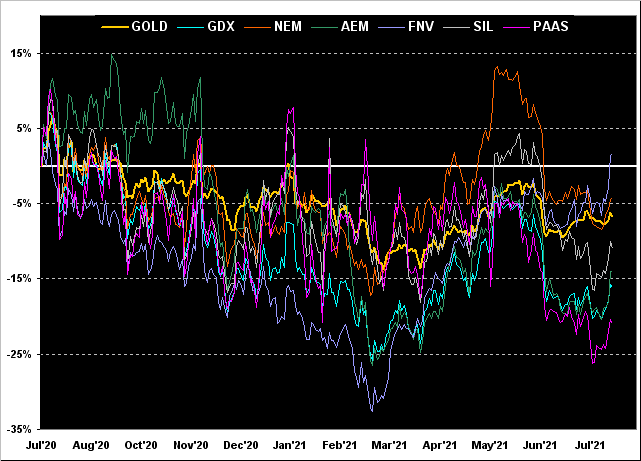 Now here’s an eye-opener that is as Pro- as ever. In going ’round the horn for all eight BEGOS Markets by their daily bars from one month ago-to-date, look notably at the ascending grey trendline for precious metal Gold. Look as well at the ascending grey trendline for industrial metal . And yet almost impossibly, the same for Silver is descending.

But here’s the good news: rare as ’tis, this phenomena has occurred (on a mutually-exclusive basis) six times since the beginning of 2020. And each time hence Silver has within a matter of weeks settled at minimum of three full points higher. So from the yellow and red metals to the white metal, there’s a tradable gift on a Silver platter. Note too that Silver’s baby blue dots indicative of trend consistency have just kinked up: 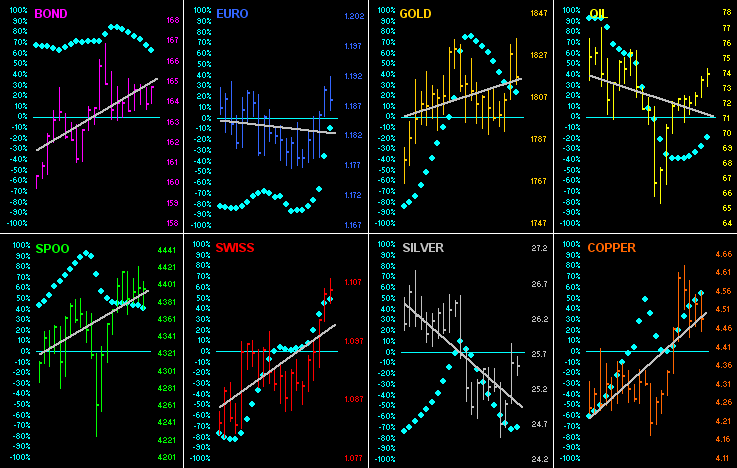 Next, specific to the last fortnight, here we’ve the Market Profiles for Gold on the left and Silver on the right, their nearby trading supports as noted, (with a little resistance up there for Gold at 1832): 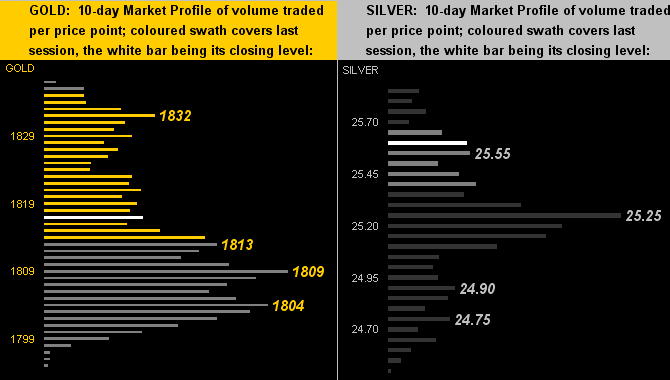 And it being month-end, we can’t quite wrap it without bringing up Gold’s Structure by the monthly bars. With respect to that mentioned earlier, the rightmost bar shows us just how comparatively narrow was Gold’s July … ahead of what we anticipate shall be a more robust, indeed august, August: 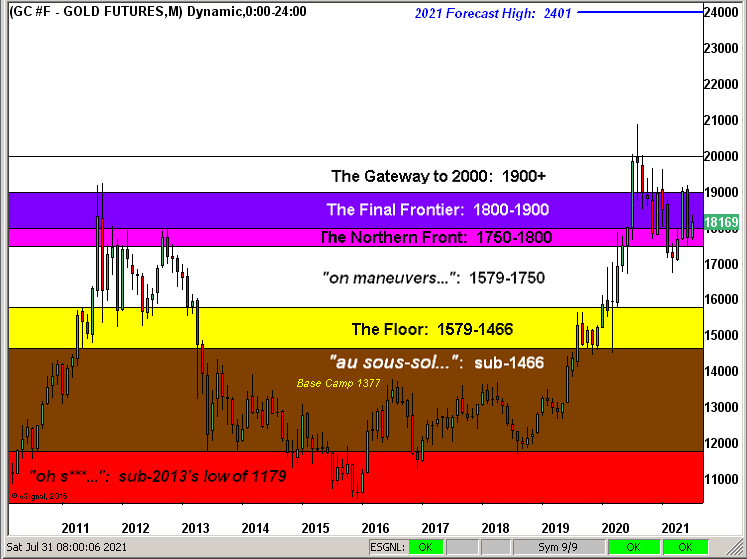 To close, we’ve these three observations:

■ From the ever-popular “They’re Just Figuring This Out Now? Dept”: Bloomy reported this past week that “Oil Rebounds After Industry Report Shows Shrinking U.S. Supplies”. Given the perfunctory shutdown of otherwise potential U.S. Oil transport facilities in the changeover of the StateSide Administration this past January, ought we be surprised? (See too, in leading the aforeshown BEGOS Markets Standings, Oil +52.4% year-to-date … Thanks Joe).

■ Next week brings the oft-dubbed “Mother of All Numbers Day” (Friday, 06 August) when the Department of Labor Statistics reports for July, the expectation being for a 9% gain over those for June, with the dropping from 5.9% to 5.6%. That’s nice, ‘cept the (Wednesday, 04 August) for July is estimated to be a 6% loss. But who’s counting, right?

■ And last Wednesday, Dow Jones “Red-Hot Economy” Newswires noted in spite of vaccinations, COVID continues to emanate from one surge to the next, but that “…a host of adaptations by governments and businesses have also helped limit economic damage…” Translated to layman’s terms, such “adaptations” are currency debasement and enterprise restriction. Reason enough to follow the stars for Gold’s august August that also shines for Silver!